In 1947, Myra Duncan began Junior Riders at her farm on the corner of Woodside and Kings Mountain Roads. Resolving to offer the very best in equitation lessons, she retained Colonel Vladimir Miloradovitch, a former calvary officer with the Russian Czar’s army. “Milo,” who brought a strong accent and uncompromising standards to his classes until his retirement in 1974, is beloved still by many students.

In 1966, Woodside Junior Riders moved to a peaceful, shady, eight-acre site on Tripp Road. This property was later donated by John R. Keily to the Town of Woodside for use by the program. An impressive series of talented instructors followed and continue over 60 years later. And generations of Woodsiders like Timmy Gallagher and Ursula Eisenhut have enabled the program to thrive through their visionary leadership and generous volunteer service.

The current program director is Kathi Dancer. Kathi lives in Woodside with her husband and two children, many pets and six horses! She started riding at WJR at the age of six. Her two children have also gone through the program. 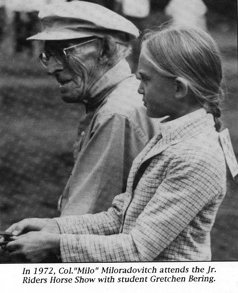